The Ride of a Lifetime

The last time I bought a road bike, my preferred riding discipline, was in the summer of 2005.  I was a year out of grad school and still feeling pretty green as a customer service representative at Seven Cycles.  Though I was always a cyclist, grad school put a damper on my riding, as I worked all day as an intern and all night as a student.  This program covered my school expenses, but left almost no time to ride.

When I started at Seven soon thereafter, I was woefully out of cycling shape, quite the opposite of my colleagues.  This isn’t to say hours are short at Seven or spent riding, quite the opposite, but my mornings, evenings, and weekends were free, and that freed up time to log miles.  Lucky for me, I was already on a bike I considered awesome.  I bought it off a lifelong friend who raced for the University of Virginia, and if memory serves, he may have even won some of those races, or a big race, or something that got him the title of champion of something.  Anyway, it was his old bike, a Cannonade Saeco frame, Kestrel EMS fork, and built to the nines with Shimano Dura Ace components and a yellow and black Selle Italia Flite saddle that I had a framed picture of.  That bike was big, red, fast, and awesome.

The Cannonade, however, put me on the spot with almost every phone call that came in to the Seven factory, “which model do you ride?” callers wanted to know.  I am a terrible liar, so I explained that I was new and anxious to get one, just like them.  What a huge help I must have been.  Clearly it was time to test ride some Sevens to learn the differences between each model.  This research would make me a better more knowledgeable customer service rep, and eventually help me to decide on which model I liked best.  Life was tough.

My first test ride was special for several reasons, but most notably because I had only been employed for a month, yet was encouraged to take a loaner bike by Rob Vandermark himself, the head honcho.  I couldn’t believe I could be entrusted to borrow a bike of this caliber, but I jumped at the chance.  The bike that had appealed to me most was a zero degree top tubed Axiom S, with blue decals.  It was built with ten speed Campagnolo Chorus, and happened to be a 58cm, just my size.  I had never ridden a Seven, never ridden titanium, never ridden Campagnolo, and never ridden a bike that was manufactured in the USA, let alone by people I knew.  I threw it on the roof rack and drove all the way to my parent’s house in Connecticut to show them the product of the company in which I worked, and to ride the roads I felt most familiar with.

The anticipation woke me up early Saturday morning.  I packed a tube, a pump, a Clif bar, and a twenty dollar bill in my jersey pockets and headed out.  I didn’t have a route or a cell phone, which is all it take to ensure a memorable ride.  I grew up in the same house, and loved getting lost, so many of the roads I took were familiar to me but it had certainly been years since I rode them.  I made it as far south as Long Island Sound, as far East as the Connecticut River, and as far north as Wesleyan college.  I didn’t take a break until Durham when I stopped at Lyman Orchard’s, “home of championship golf and championship pies.”  That was right around mile 80, I hadn’t eaten since breakfast.  I was starving, and craving a championship pie, so the orchard was a perfect spot to pull over.  I ate most of a 12” pie, and stared at the Axiom all the while.  I was giddy.

I suppose until you ride one it’s just rhetoric to read about, but I feel like it is my duty to try.  Do you know the feeling when you are coming down a hill at a decent clip, and have to lean into a turn as the road starts to ascend?  G-forces push down on your shoulders and hips.  Supple rubber grabs hold of the warm asphalt.  Bearings spin effortlessly, impossibly smooth.  Air rushes loudly through your helmet.  You surge ahead.  Do you know what I am talking about?  That’s what this bike felt like, but not just around corners, it felt like that all of the time.  Warm, smooth, effortless, exhilarating.  Was it the titanium frame?  Adrenaline?  Campy wheels?  I didn’t know and it didn’t matter.  I just wanted to finish that pie and get back on the road. 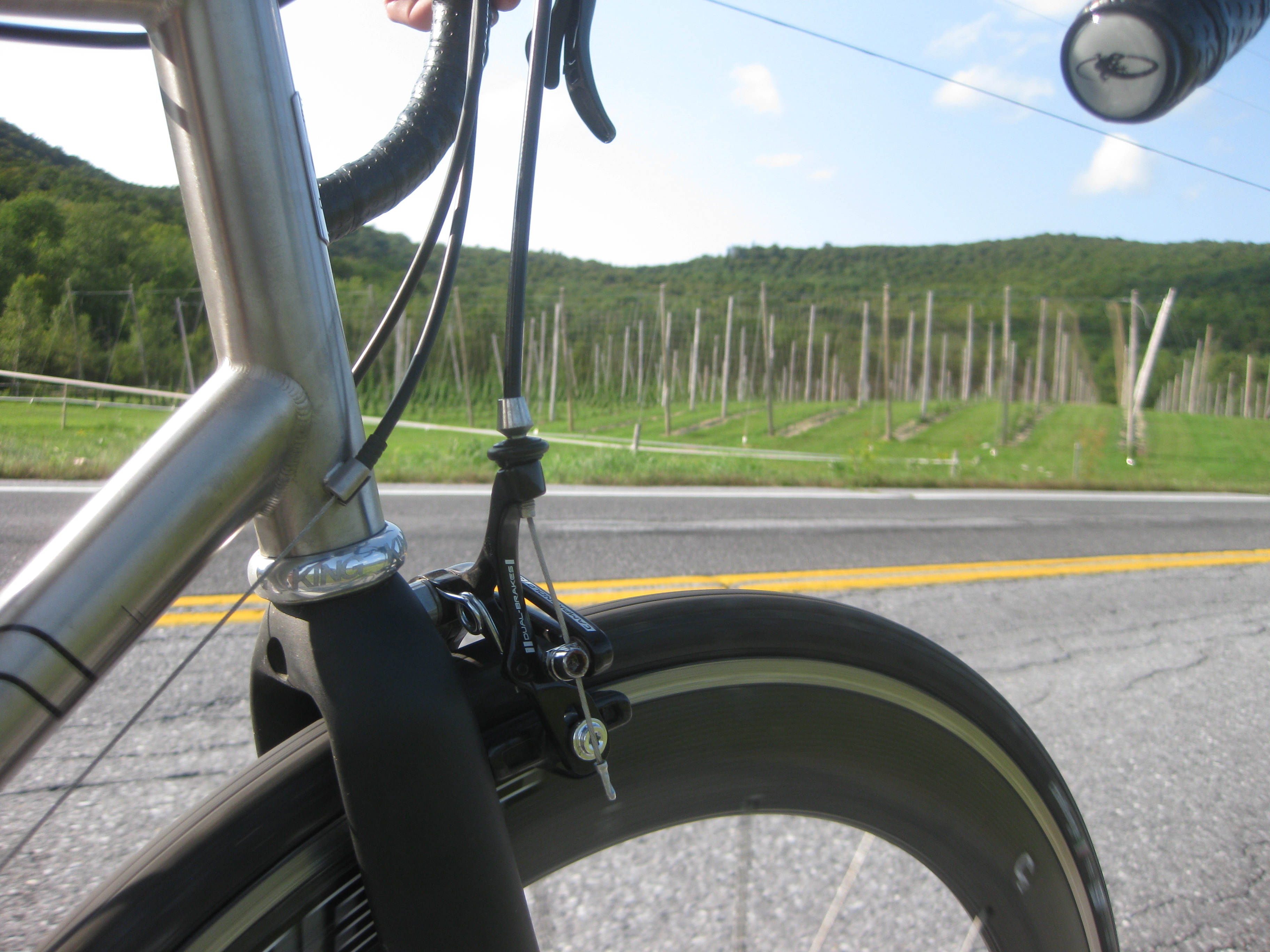 I didn’t fabricate the bike, I didn’t assemble it, I didn’t even tune it prior to my trip, but it felt like it was mine all along.  Everything was precise.  Everything was comfortable.  I spent most of the time looking at the green Connecticut scenery, not at the one of a kind titanium bicycle beneath me!  It sounds lame, but I felt connected to the bike in a way I didn’t know prior to the ride.  I jumped on the bike thinking it was a museum piece, and jumped off feeling like it was made to be ridden, and ridden hard.

When the ride was over, and I got back to work, I had a new enthusiasm to relay to the callers, and did just that for nine more years at Seven Cycles, and am still at it at True Cyclery.

Though I ended up with an Elium SL, it’s only because of my second test ride, a story I’ll tell soon.  Thanks for reading.