Detour de Connecticut: A Day in the Saddle

The Detour de Connecticut was a bit of a mystery as far as I could tell.  From all I had heard, the ride itself was similar in design to the famed D2R2, in that it was mostly off road, close to 120 miles in length, offered rolling hills, views, farmland, and required bikes with a little more heft than your average road bike.  The host wrote up a synopsis that explained that the ride was difficult but doable, almost all ride-able, would certainly require some orienteering, and to bear in mind that these hints were merely the opinions of an ex-pro mountain biker, so therefore you should ride at your own peril.  Unlike D2R2 there wasn’t much information on the ride, no forums discussing tire choice or air pressure, no previous hashtags on the grams, and no one I know who has done the ride for the past seven years to bounce questions off of.  I thought I’d write a recap of the ride in case there is someone out there who is looking for a play by play of what was an absolute blast of a ride.

Before digging in, I want to thank Salem and Justin, the hosts, for presenting such a wonderful experience to the masses.  Organizing, plotting, inviting, managing, all take time and effort and to do it out of the goodness of their hearts, for the fun of it all, made the entire trip that much more special.  Thank you both so much.

On to the write up.

What we knew going into the ride was that it was unsupported, around one hundred twenty miles longs, and more than seven thousand feet of climbing. 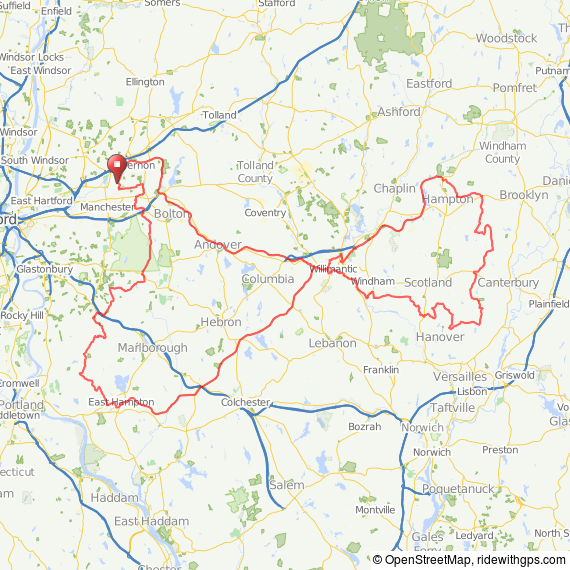 We knew the riding surface would feature pavement, unimproved roads, dirt roads, gravel roads, and full on off road.  The suggestion was 32mm tires or wider, and to tack an additional fifty percent on to your average century time.  We were given a gpx file and five pages of cue sheets and notes.  Also of note, the ride was completely free for participants.

An empty but good sized parking lot awaited our 6:15 am arrival.  It took about 45 minutes from New Haven to get to the easy to find Hop River State Park Trail starting point.  Not knowing how we’d fair with the off road stretches, we wanted an early start.  To ease the morning transition, we packed the night before, and went over board in an effort to be prepared for the worst.  We each packed the same stuff in our Revelate bags which consisted of:

My bike was set up with 32mm Clement Strada USH tires at 60lbs of pressure, and a one by drivetrain with 42 up front, 11-42 in back.  Kristin was using 35mm Clement X’Plor USH tires at about 65lbs., a 42 up front and an 11-36 in back.  There was a note about road riding on this trip, so we left the tires high thinking we could deflate as needed.

We were riding by 6:30, with windbreakers on to block the chill. 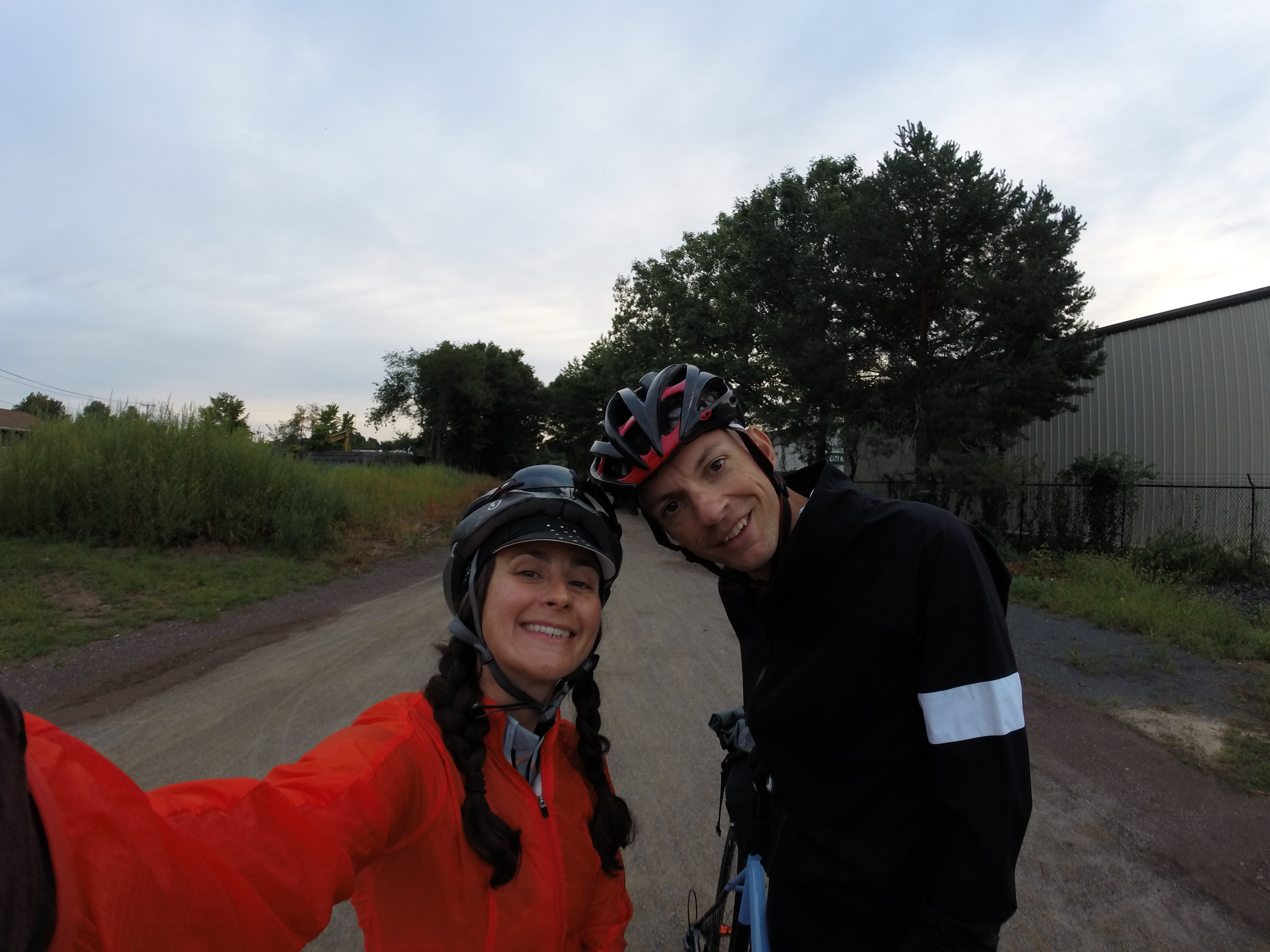 Kristin and I at mile 0.

I am certain I have never stepped foot in Manchester, which is probably because I had never heard of the Hop River trail.  The trail was built on an old rail way last used in the 1970’s but built back in the 1850’s.  There are museum style podiums along the way that give insights into the path’s history, but at our speed I could only read a handful of the titles.  The surface is finely crushed gravel for the entire 20 mile trail, you can fly..  The path is beautiful, secluded, and often times perched atop a sheer cliff on both sides.  We loved it, and  thanks to the speed, the scenery, and the early start, the first 20 miles felt free of effort.  When we popped out the other side, we had just a century remaining.

Perfect trail to start the ride, flat and fast.

From there we danced on and off roads mostly following signs for the East Coast Greenway, knowing full well that the rest of the riders were now underway and on our tails.  The path turned to fresh pavement, as we neared downtown Willimantic.  Looking at the map, our first trip through the city felt odd, instead of jumping up onto Main Street as we expected, we were directed to go away from town and up Mountain Street, to ride through a neighborhood, and then to head back to Main Street.  It felt like an odd place to add a quarter of a mile onto the route, that is until we took a left over a pedestrian bridge that spanned the Willimantic River, then a long ribbon of land, and finally about 6 railroad tracks switches and all.  That was an early highlight, such a cool bridge, a must see, more so than the famed Frog Bridge that we’d pass moments later.  We stopped at another bridge, “the garden bridge,” to have a snack and snap a pic.

Downtown Willimantic on the Garden Bridge

The next off road section came soon thereafter, somewhere off of Wyndham Rd.  This section was basically a pump track, there must have been fifty whoop-de-do style mounds, one after another, each as smooth as the next.  Maximum fun.  A railroad crossing in the middle of the woods firmly planted Stand By Me in my head for the better part of the next thirty miles, another highlight.

Back on the road for a bit, past a vineyard, and up a few moderate but not too strenuous climbs, and for the first time we entered some technical gravel riding just off Devotion Road.  The woods were all ours, and the trail, though narrow and heavily rocked and rooted, was ride-able.

Some technical off road was better attempted off the bike.

I bailed out on a narrow dried up river crossing, but only because I am a wimp.  When it felt like we were squarely in the middle of nowhere, it was nice to know that the cue sheet was spot on, we never felt lost.  We relied on Garmin for the easy parts, but in the woods, the notes were dependable from start to finish.

We celebrated another off road adventure with half a PB&J.  As it turns out, all I want on a long ride is a smooshed PB&J, heavy on the peanut butter.  We pushed off and discussed how close we thought the main pack would be, and when they might pass us.  We were at mile forty or thereabouts, with just eighty left to go, and more importantly, thirty until lunch.

There was a blend of paved roads, hard pack, soft pack, wood trails, and thanks to the mix, the we were blissfully unaware of our legs.  On one of the more technical downhills, near a wedding rehearsal, and right around the sixty mile half way point, we pulled over to GU.  Before getting the whole packet down, the tell tale sound of an off road train of cyclists was upon us.  The peloton, as it were, caught up and sailed pass with friendly greetings from everyone.  Whoosh.  We were reminded immediately as to why we left an hour and a half earlier, their pace was impressive.

We caught up at a water stop soon after and met both Salem and Justin, the hosts, who were friendly and appreciative.  Salem, the ex-pro, used to race in Boston with the modern day Seven Cycles founders back in the late 80’s/early 90’s, small world!

We hung with the pack for a few miles (minutes?) after the break, but opted to conserve energy for the second half.  From that point on, our focus shifted to lunch at mile 70, and what we’d get given an infinite menu.  The path to lunch would take us on the Airline Trail, which we were both excited to see after hearing so much about it.   We hated it.  At least at first, because the gravel was so chunky it jostled and altered our course with the greatest of ease.  This was the first time I thought about tire pressure.  Truthfully we were both beginning to get a little tired at this point and were in need of an actual lunch.  Great news followed, before we completely bonked, the trail turned to fine gravel and thanks to that, we cruised all the way to the the Willimantic Food Coop for a much needed lunch. 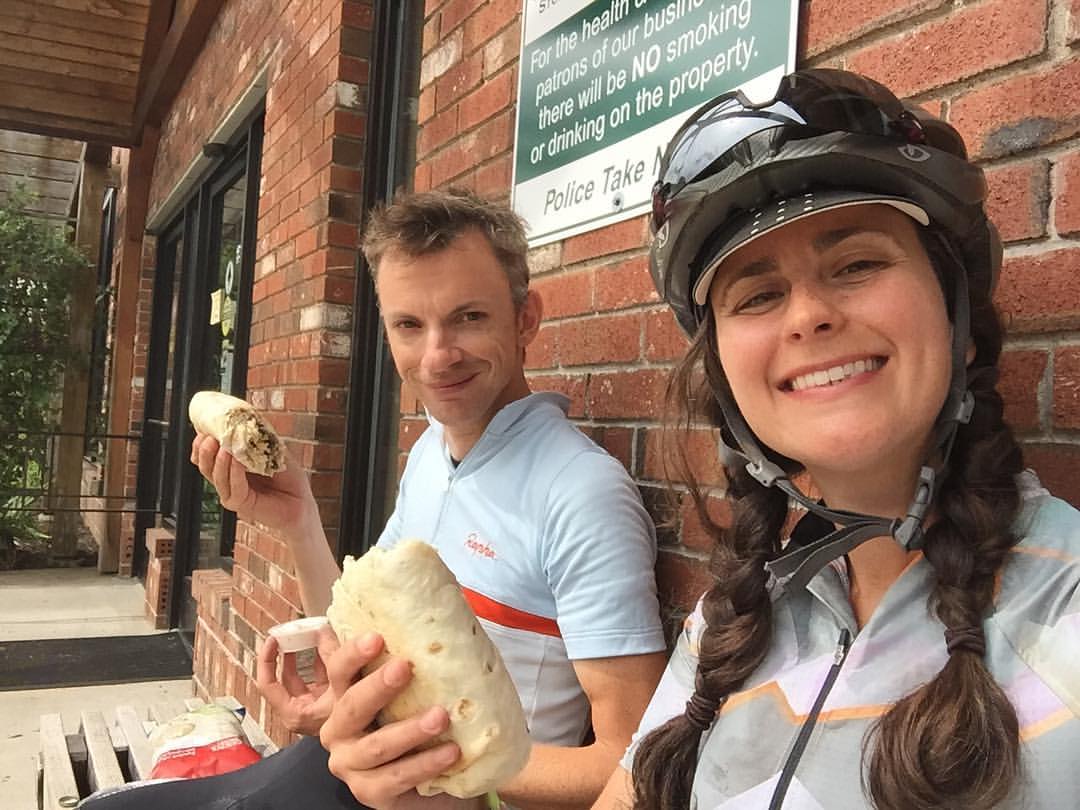 The cure to our h-anger?  Burritos, chips, cold cokes, and brownies.  That was our longest stop of the day, and it felt good.  We had new life and the next dose of milage came with relative ease, especially the next twenty miles of Airline Trail.  So smooth, so fast.  The speed came to a screeching halt upon reaching State Forest Rd.  Chatter bumps, loose large gravel, dust, and less than half a tank of leg energy was enough to test our limits.  The descents were jarring, the ascents were slow and steep.  Somewhere up one of the climbs we decided Kristin deserved a 11 – 42 cassette as well.  Mercifully the road turned back to unimproved pavement, and our spirits were improved with it.  Hills were easier, we ate a PB&J, and we were back on track.  A second wind!  Finding our final off road section of the day, a mere ten miles from the finish, we were joined by a rider named Dreux who thought he represented the caboose of the ride.  As we entered the woods, the sun began to go down and it was gone before we got out.  With a chill in the air, headlights burning bright, and a newfound friend, we powered through the last ten miles with a delirious jubilance. 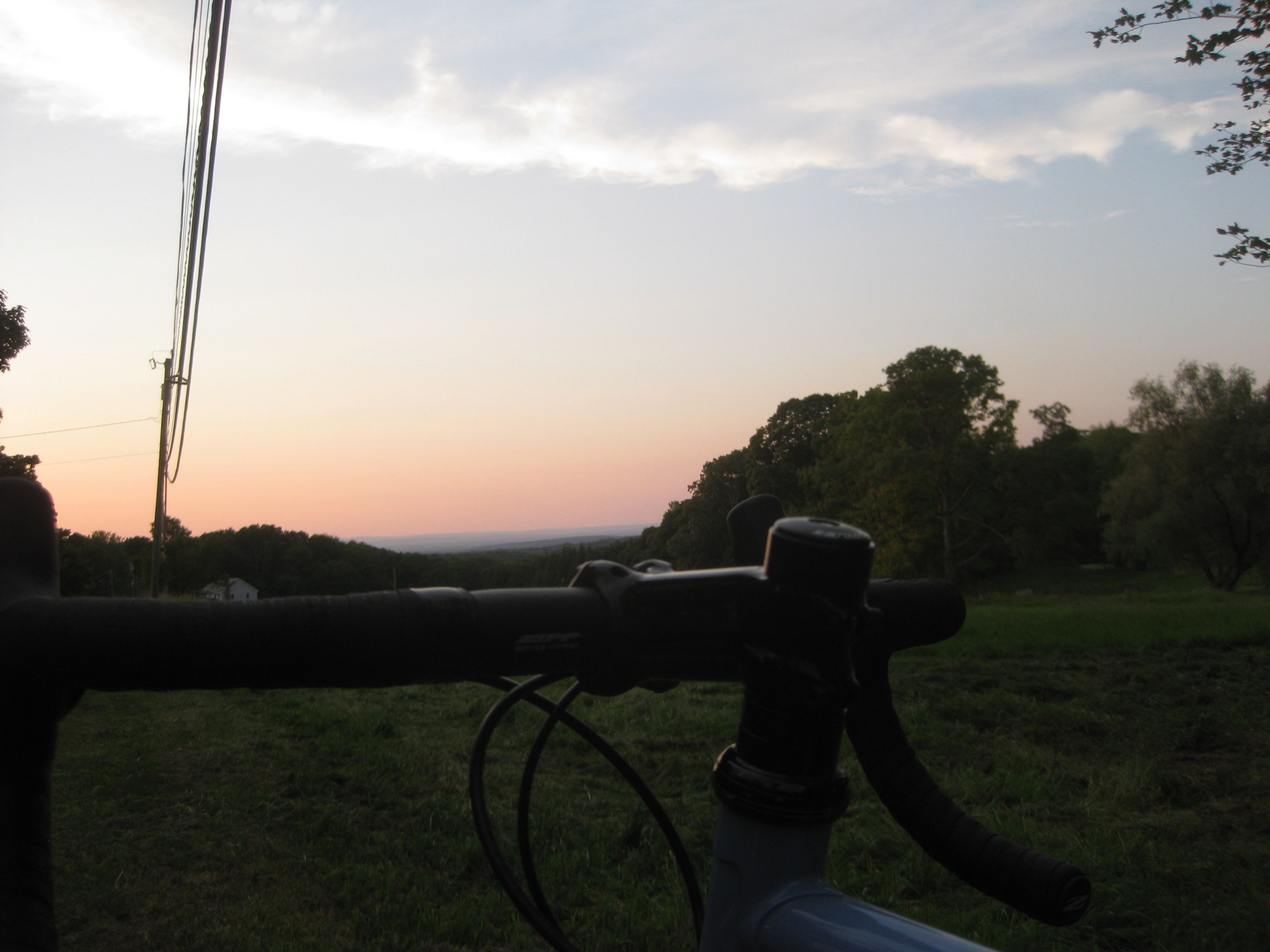 Having reflected on the ride for three days, I can say with certainty that it was a complete blast.  I enjoy a sense of adventure, have no problem trying to ride a few technical sections on my cross bike that might be better approached with a mountain bike, and love seeing new parts of the state.  The route was planned by a true professional, it was logical, easy to navigate, and had a nice flow throughout.  We had no mechanical issues, and the only thing I’d do differently is to drop at least ten pounds of tire pressure for the rough stretches.  I ended up eating just one bar, 2 GU’s, 2 PB&J’s, the brownie, and a burrito.  I cleared 5 bottles of water and ended dry so perhaps I should have filled up once more when I had the chance.  Gearing was great, I wouldn’t change a thing.  I left my good/larger camera at home, thinking I wouldn’t want to have it on my back the whole ride, but I wish I brought it to do a better job capturing the beautiful route.

Looking froward to doing it next year, hopefully with a larger contingent of New Haven’ers.