The final four miles on the last ascent of the Kancamagus scenic byway, provides beautiful views.  Lily Pond’s mirrored surface sits just off the side of the road, two and a half miles from the top of the pass, and is important to me because it represents one of my many check points along the ride.  Depending on the day, Lily Pond can either provide sweet relief because there are only two more checkpoints until the summit, or anguish because there are still two more checkpoints until the summit.  This year, my fifteenth in a row of riding the Kanc, I pedaled past Lily Pond at 7 mph.  I’ve had the pleasure of viewing Lily Pond at 5 mph, 6, mph, and even 8 mph not too many years ago, and can attest to her natural beauty no matter the pace.  At 7 mph I had about 21 minutes to go.  I had no hopes of catching Taylor and Matt, they were long since out of sight.  Dwight was in sight, and if I had his legs, and he mine, I’d have caught him.  Lisa and Ian were just behind me, too far to chat, but too close to ease off the gas.  So I kept pedaling, and as I was thinking about all of this, I drifted off into the memories of Kancamagus’s past. 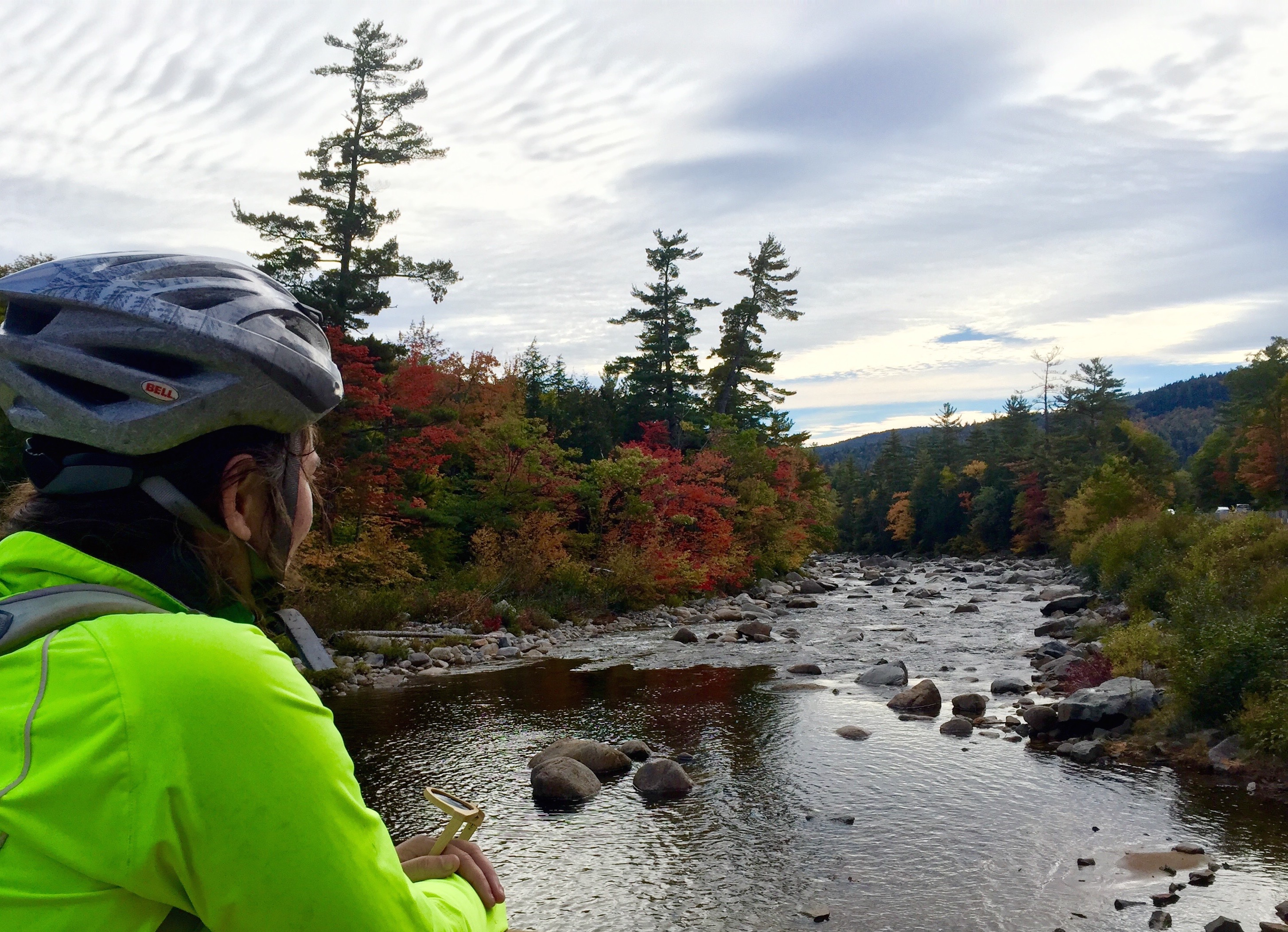 When I first got the invite to ride the Kanc in 2004 or 2005, I was as green a roadie as I was a new employee at Seven Cycles.  A few other employees had organized the first Kanc ride some years before, but had so much fun that it had become an annual event.  Memories blur together, but it only takes someone sharing a story to bring me back to a particular year.   Like that time Fernando had to hitch hike his way to the top after flatting so many times we all ran out of tubes to give him. 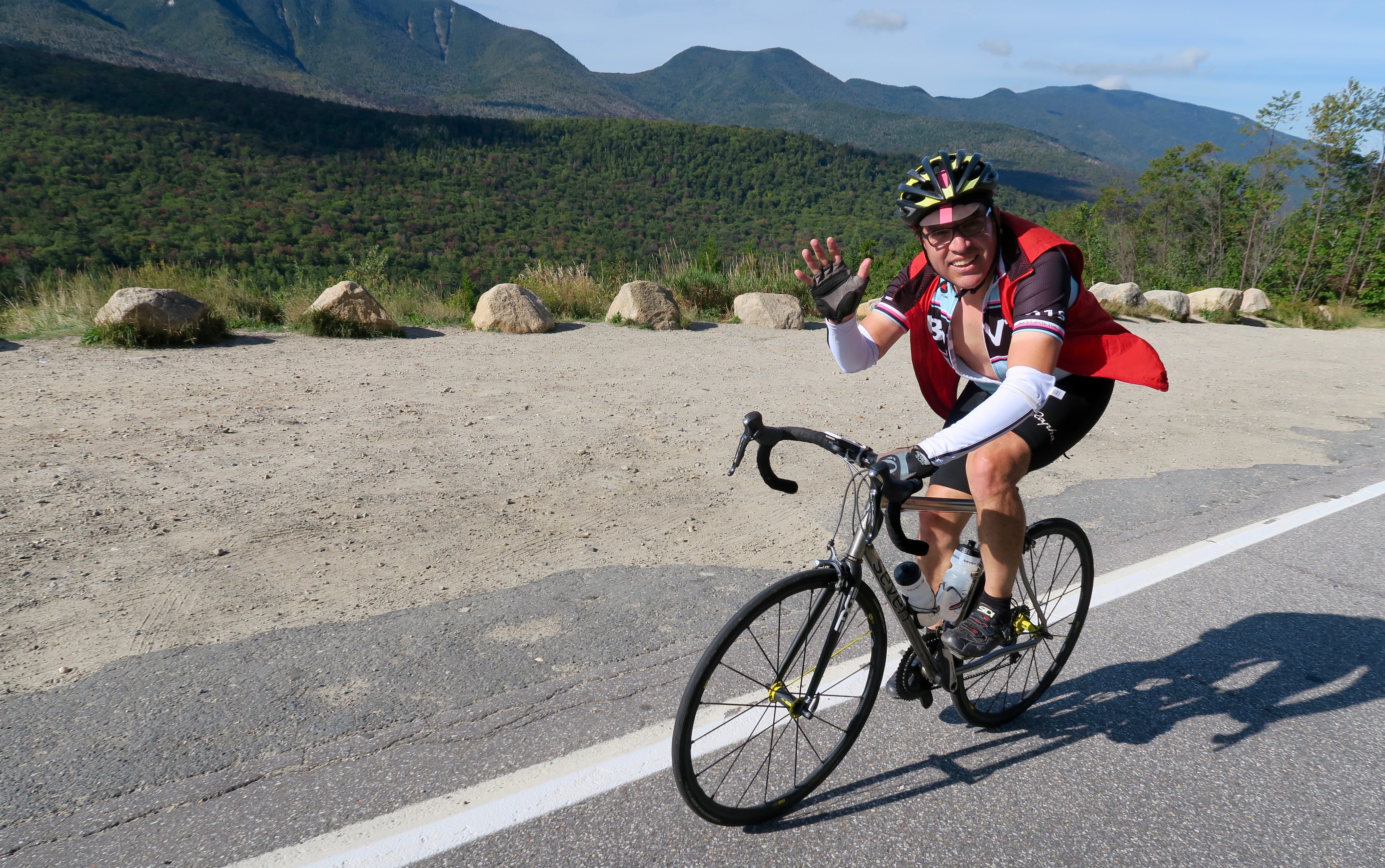 Fernando, part of the original core of Kanc’ers

Or when Tim cracked a rim, a carbon rim, on the rail road tracks at the bottom of Bear Notch.  Or another year when Fernando broke a spoke on the very same tracks, rendering his wheel useless, and had to hitch hike his way out yet again.

Headed to the railroad crossing that has taken out at least two sets of wheels.

Or one unseasonably cold September when Kristin and Ellie fought off hypothermia with the purchase of matching, souvenir style, hand woven, nordic wool sweaters at Bart’s Deli and General Store. 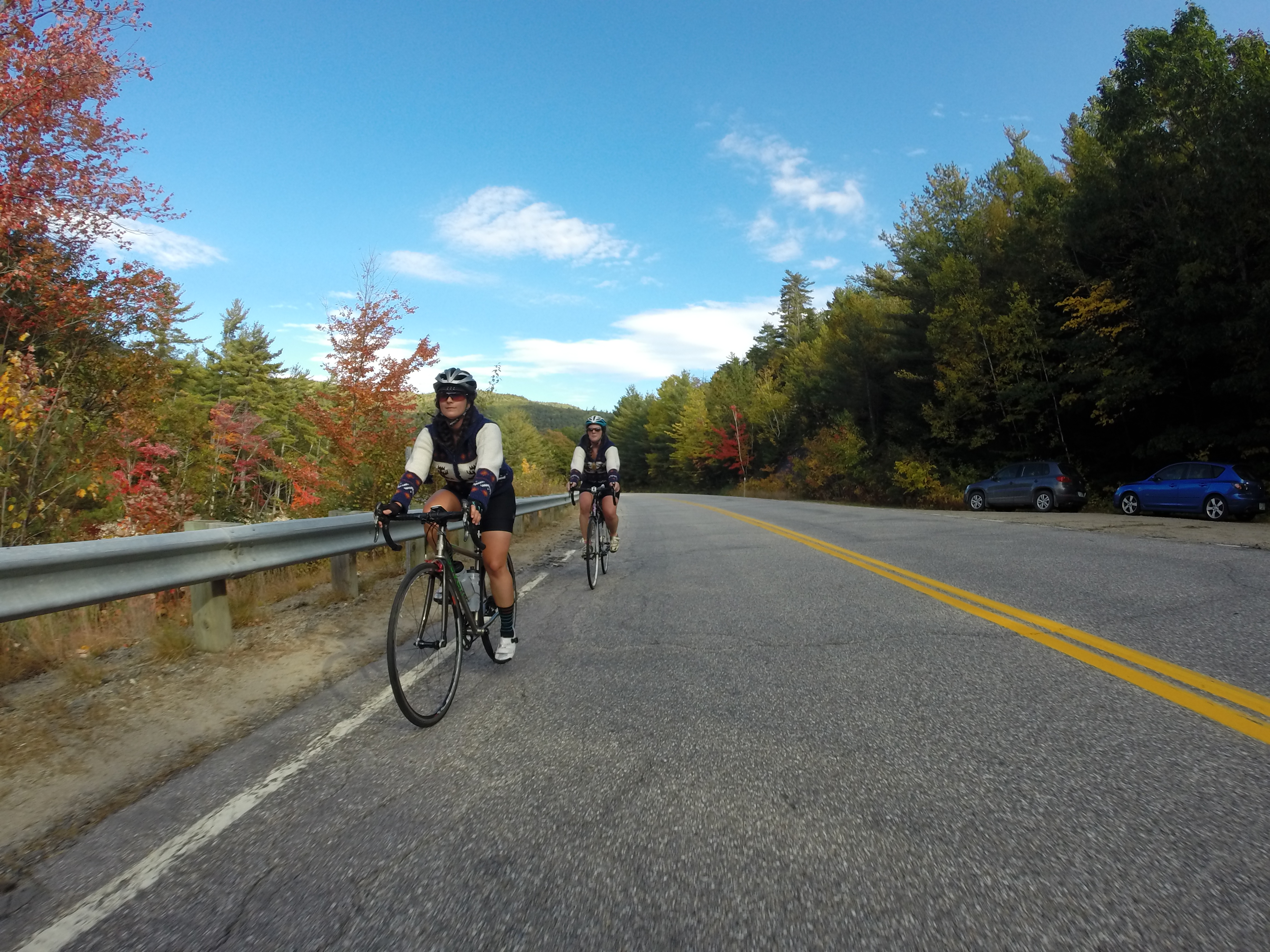 Or my favorite/least favorite moment when Neil, looking so mid 90’s euro cool,  passed me one hot August day with his helmet clipped to his bars without saying so much as a word on his way by.  Another year, when we all thought our fitness was good, but John’s friends showed up on a tandem and bought us we weren’t fit in the least.  Or when we learned the hard way that the house with the 7up sign and the huge glass retail style windows isn’t a convenience store at all, but someone’s private residence.  Just three years ago Ian came out hot for the first five miles of the ride, but fell off the back for the rest of the ride, only to finish first the following year. 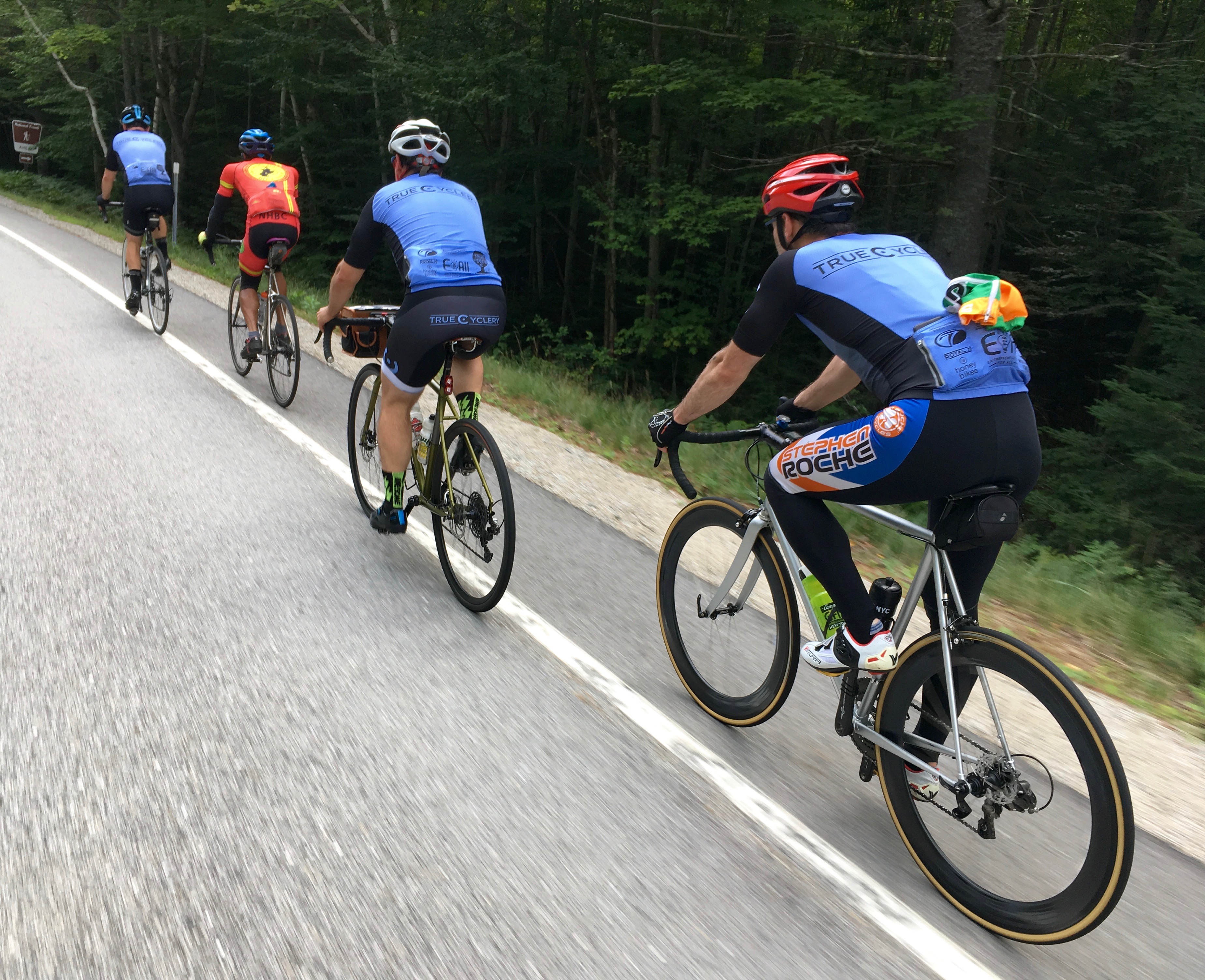 A more experienced Ian saves his energy in 2018.

Rolling up to the next checkpoint, Beaver Brook Overlook, 11 minutes to go, I shook loose my nostalgia and replaced it with pride for what the Kanc ride has become.  This is the third year of planning the ride since moving to Connecticut and three of the riders had done it all three years, Bill, Lisa, and Ian.  It is impossible to know what people think (without asking them) about the ride, but if they keep coming back I take it as a sign that they either love it like I do, or love Kristin like I do, or can’t say no to group invites like I can’t.  No matter the reason, I was left feeling happy that a new core of nutmeggers has formed, and done so while embracing the original core.  Also on my mind was that next year, if the same crew shows up, half of the riders will be on Sevens, which is to say, we had four this year, but two more are in the works.  I may have taken the reigns of planning the Kanc, but it will always be closely tied to Seven Cycles.  To have found newcomers who not only embrace the ride, but the bikes that I hold so dearly, well, it just warms my heart.

The final checkpoint, the CL Graham Wangan Overlook gazebo is the last landmark before the top and is important because now you know you’ll make it, and that relief is only a few moments away.  The gazebo is always packed with people who turn their gaze from the Swift River Watershed and the peaks of the White Mountains, to watch in amazement as we pass by.  With the top almost in hand, and people watching, I find myself tightening up my posture and pedaling a little faster to make it seem like the previous hour was nothing less than a most enjoyable experience.  Sometimes I’ll waive, smile, and even stand up on the pedals to suggest I have something left in the tank.  This time Taylor, Matt, and Dwight were waiting at the top, still euphoric from the effort and the realization that all that separated them and a dip in the pool was a 12 mile descent.  As is tradition, we waited for the rest and took a celebratory summit photo for the memory books. 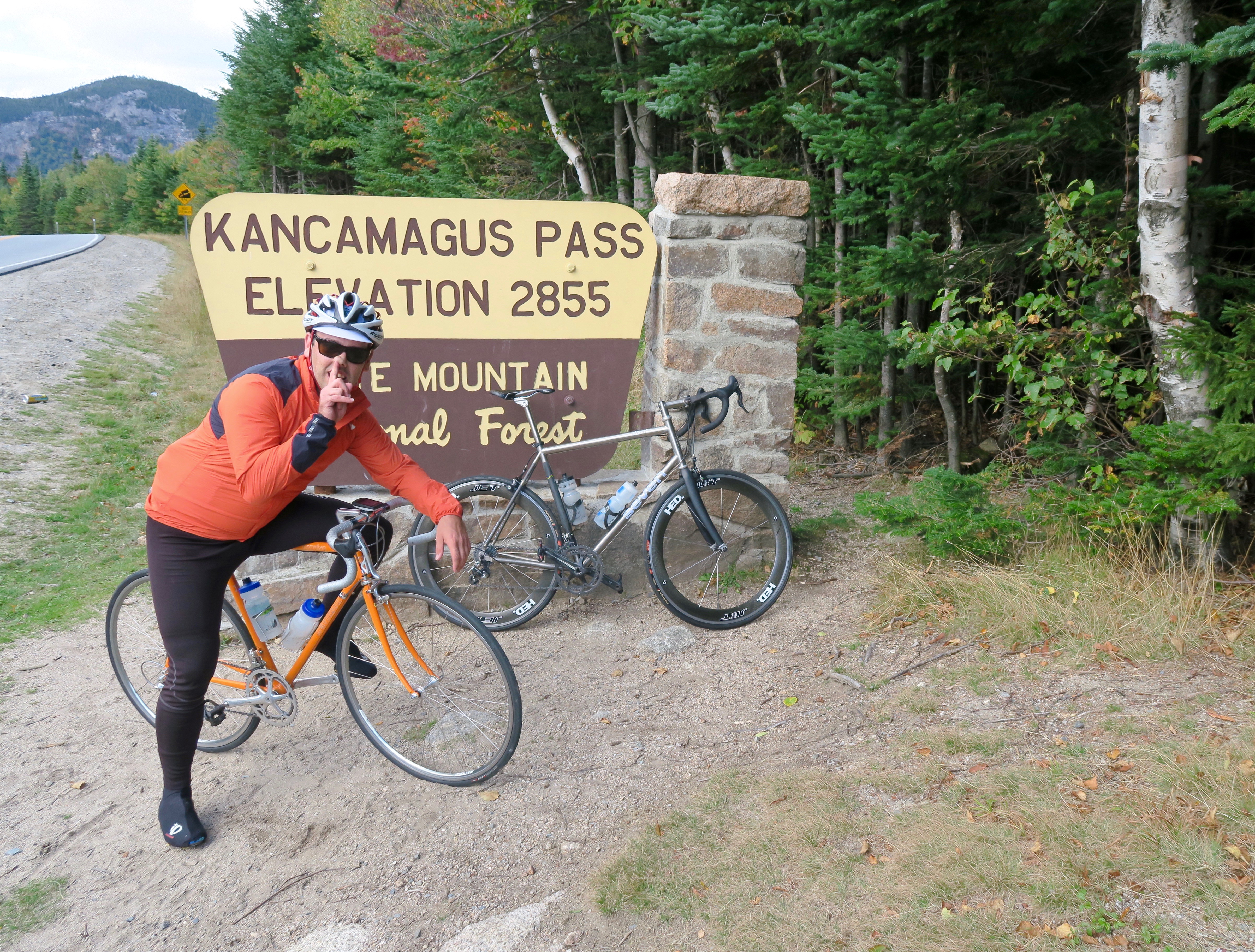 David, sushing the crowd, or maybe picking his nose? 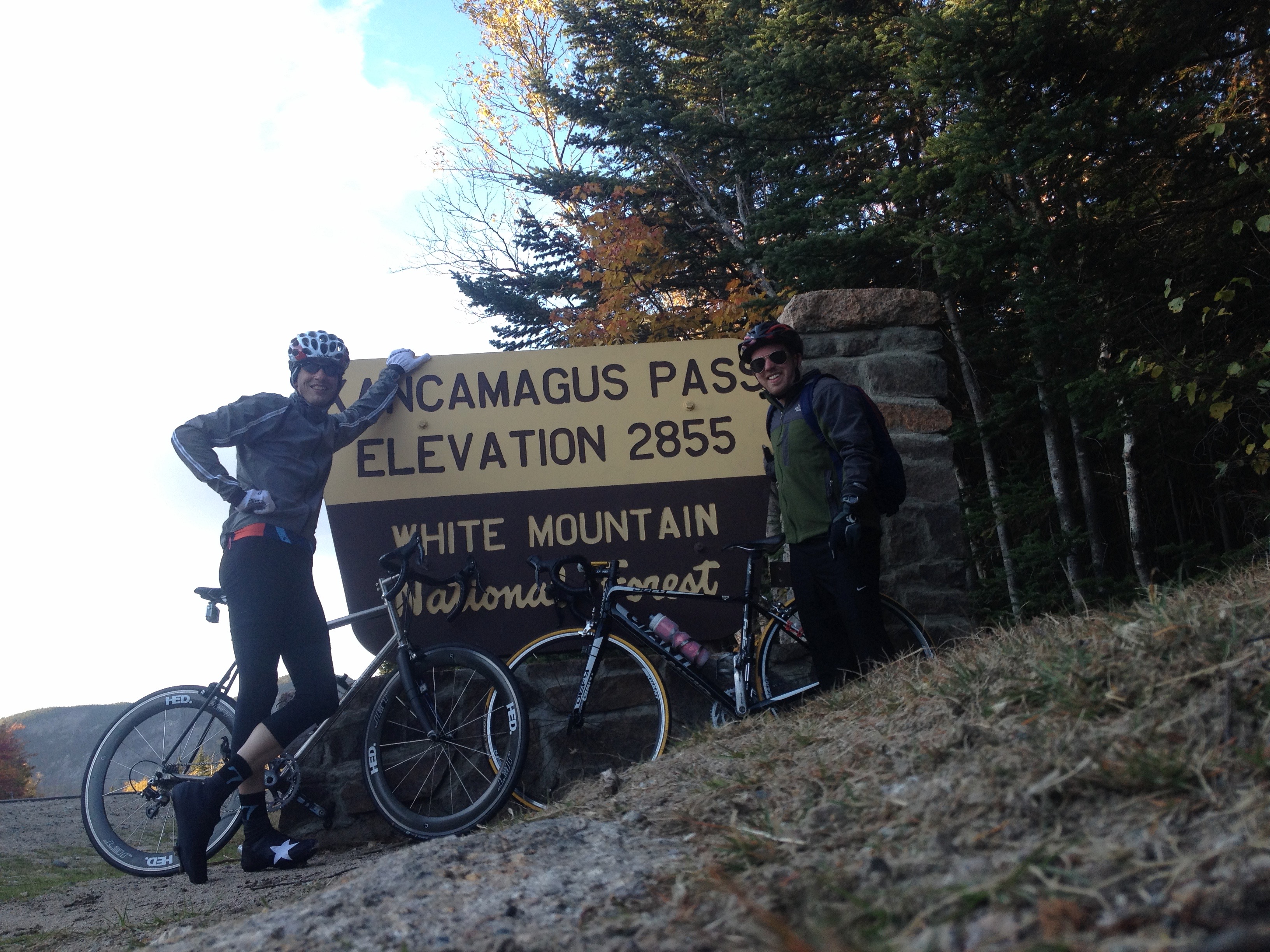 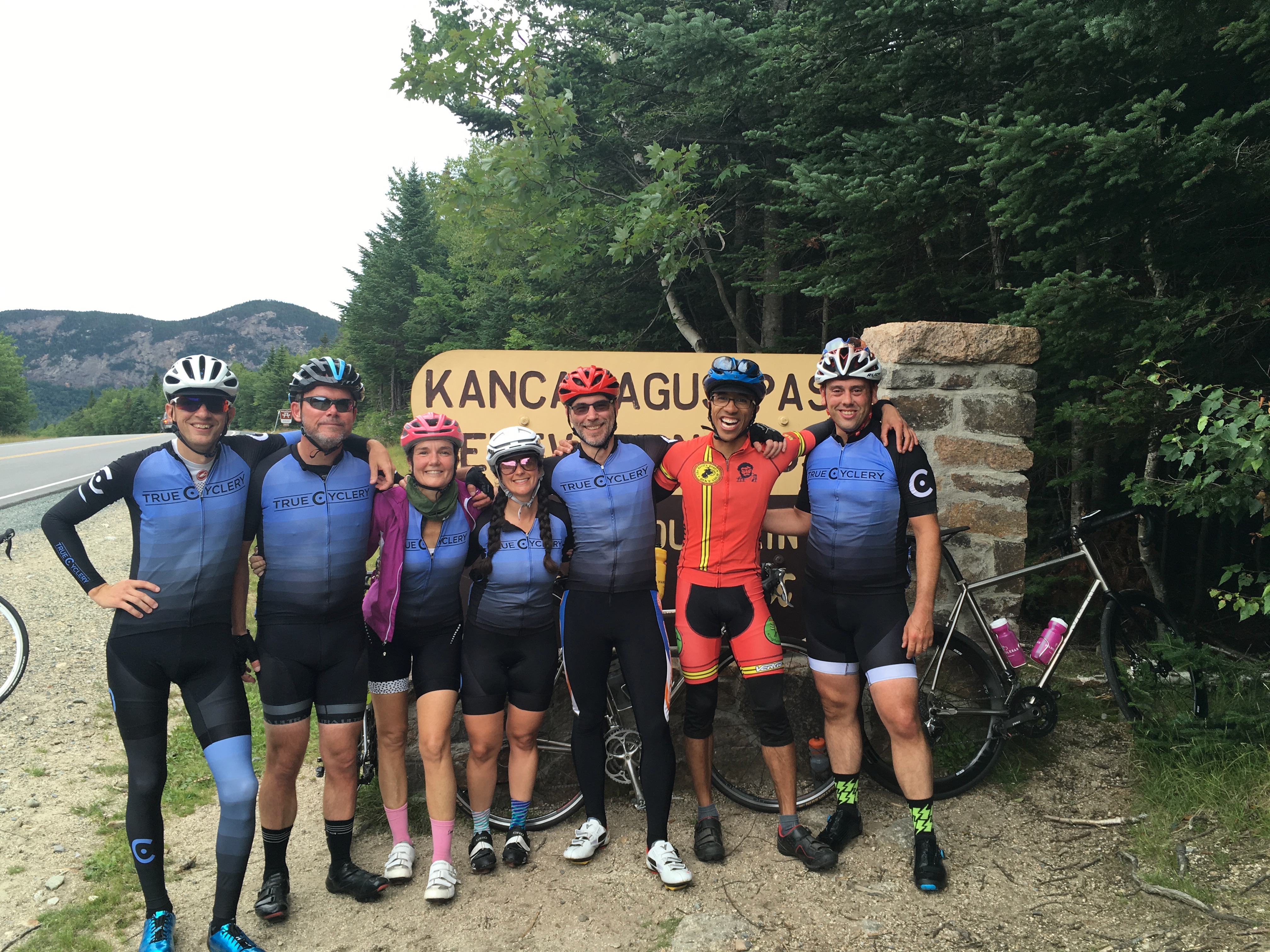 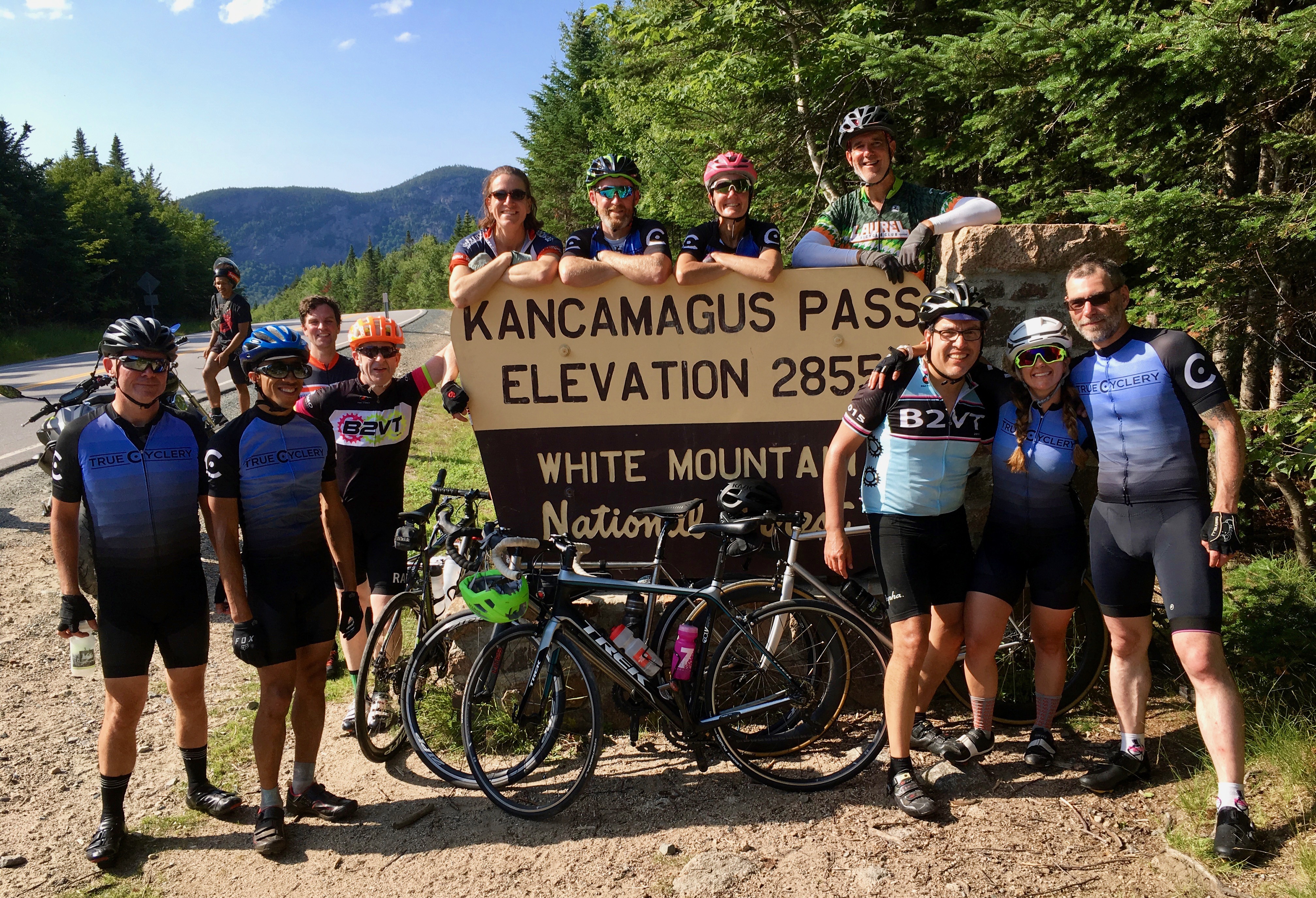 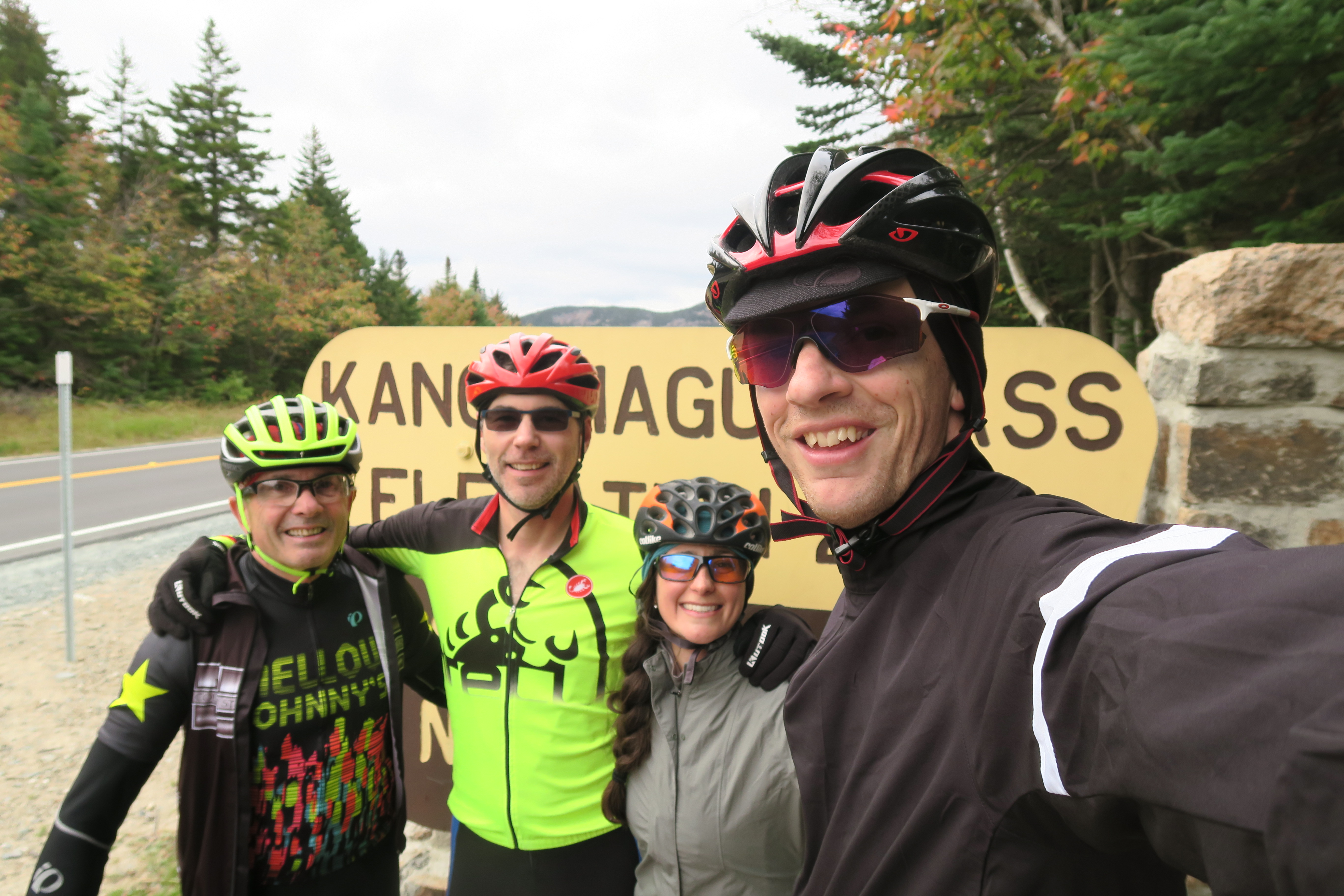 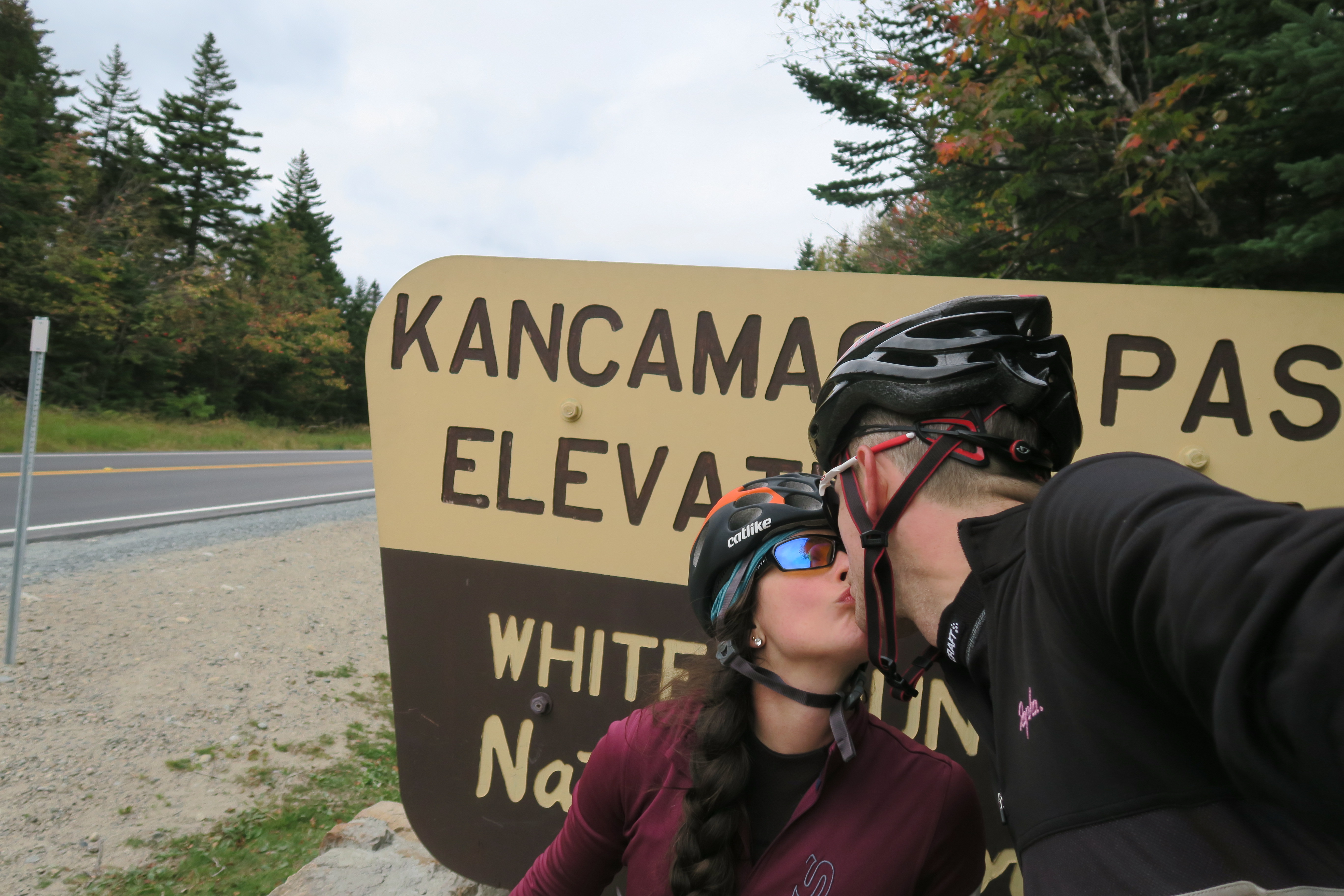 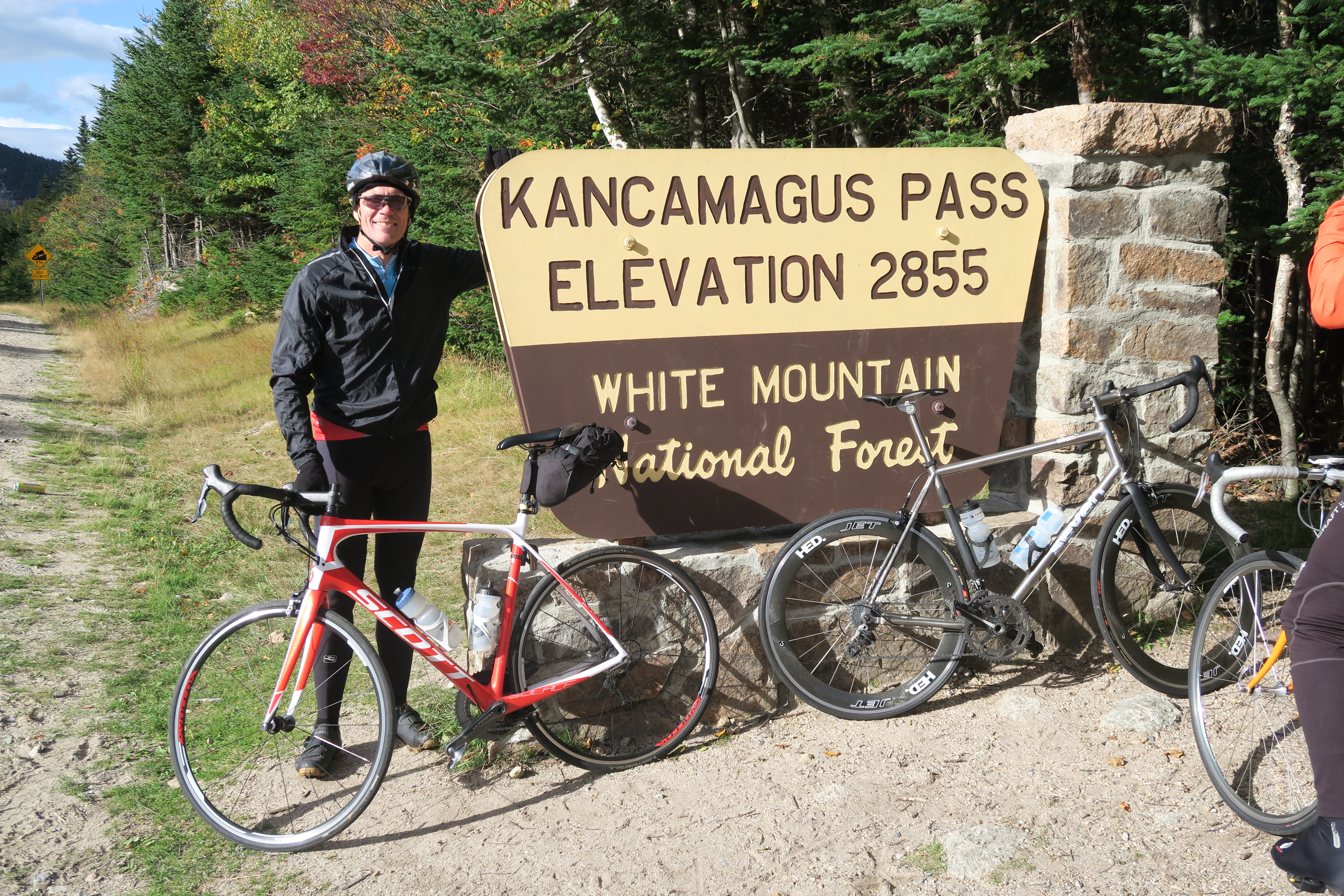 I look forward to each Kanc ride because each year takes on its own vibe, and each year feels like the best one yet.  This year was no different.  For starters, we had a big group, and a rental house with a porch, a grill, and a fire pit in the backyard.  When the ride was over we cooked out, cranked tunes, lounged, laughed, and did so until what felt like 1:00, even if it was only 10:30.

Congrats to the first timers and the veterans, and thanks to everyone for keeping the Kanc alive, I love that weekend.